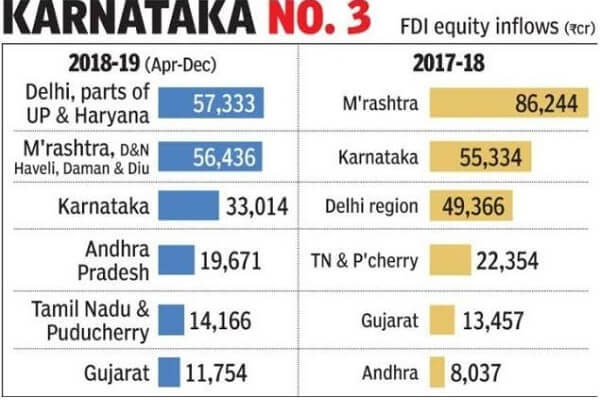 Check this article and get the most relevant information about the top 10 highest FDI states in India. Till date, Maharashtra was leading as one of the top contenders for FDI in India; however in the recent reports by Times of India, Delhi-NCR has taken over Maharashtra’s place being on the top.

There are 8 other states that rank equal in importance of FDI. Do you know India has received the highest FDI according to the reports which is worth $64.37? Read the article till the end and share your feedback with us. The figures mentioned below are in crore.

Delhi ranks on the top position along with UP and Haryana as mentioned earlier too with an FDI report of INR 57,333, and that is quite a huge number to declare. This shows that the FDI in some states has increased to a great extent. Maharashtra stands on the second position after Delhi. The RBI reports and other surveys have given the total FDI of Maharashtra to be 56,436 as of 2018. We just began writing on the top states in India based on highest FDI; read further to know more.

Karnataka is on the third position for FDI which was reportedly noted to be 33,014 crore. As per the reports, it is the size of manufacturing units, services offered, and size of the market that has contributed to a positive effect on FDI flow.

Andhra Pradesh enjoys the fourth position and gains an equal importance in the reports of FDI. The total numbers in crore have been reported to 19,671 as of last year. Read further to know which state is on the fifth position of top states in India based on highest FDI.

Other than Tamil Nadu, even Puducherry enjoys an equal limelight in FDI’s updated records. Both the states have a set record of 14,166 in crore. The states have contributed a lot in terms of its internal development and infrastructure too.

According to the recent reports, West Bengal has recorded a foreign direct investment of $3,912. West Bengal is reportedly the sixth highest FDI state in India. If you are finding this interesting and wish to know more about the other 4 states, continue reading. Gujarat’s worth $66.8 bn exports have been generated as of 2018 reports. It means the state contributed 22% of India’s exports. The FDI in numbers are 12,618 crore. It is the seventh amongst the 10 Largest FDI States of India.

Telangana’s FDI equally increased if you have to relate with other states. The state managed to generate 23,882 crore of FDI last year.

If you have to compare the business perceptions, Jharkhand must rank on the top. The total investments received as of 2017-2018 are 13,002 CR.

Last but, not the least we have Rajasthan in the list of 10 Largest FDI States of India. The state managed to receive INR 7252 cr as a part of their FDI. Hope you are enjoying the readings on this blog. If you find this article informative, please leave a thumbs up or your valuable comment in the same.