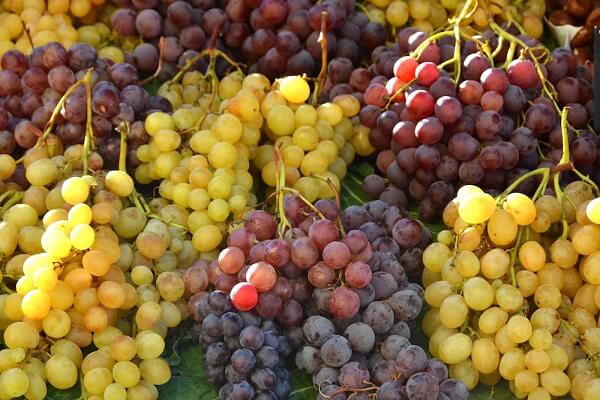 Grapes are majorly used in producing wine, jams, jellies, candies, and juices. Nashik valley in India is known for the largest capital of grapes in India. Indian produces more than 20 thousand tonnes of grapes every year from different parts. Some of the most popular vines emerge from the Nashik Valley. We have a list of top 10 grapes producing states in India that you will give you more insight on grape production.

Before be begin mentioning about the states, you may also need to know the different varieties of grapes produced in India. Few major varieties to mention are; Tas-A-Ganesh, Perlette, Bhokri, Gulabi, Dilkhush, Bangalore Blue Grapes, and Shared Seedless. Majority of these are in great demand in India. All the data represented below is with Area in 000′ ha and production in 000 m. Maharashtra is a leading grape producer. Nashik being in Maharashtra is responsible to make it reach on the top. Other grape producing areas in the state are, Satara, Ahmednagar, and Sangli. The state has strength to produce 440 (000 m) of grapes per year in 82 (000′ ha) area of land.

Karnataka also produces special varieties of grapes such as Bangalore Blue, Dilkhush, Thomson Seedless, and some more. Top wineries in Karnataka are Grover Zampa, Alpine, and Kinvah vineyards. Karnataka manages to produce annually 317.6 (000 m) of grapes in 17.4 (000′ ha) of land.

Andhra Pradesh produces varied types of grapes in India such as Thompson Seedless, Tas A Ganesh, Bangalore Blue, and more. The districts popular in the production are Chittoor, Medak, and Rangareddy. Andhra Pradesh grabbed the fourth position with a production record of 29.8 (000 m) of grapes annually in its 1.4 (000′ ha) area.

Mizoram’s grapes are in great demand too and thus, the state ranks on the fifth position in its list of top states in India based on grapes production. The Mizo Hills and Hnahlan village are known for grapes production in Mizoram. Mizoram’s annual grapes production on an average has been 18.4 (000 m) in its area of 1.2 (000′ ha).

Punjab takes over major attention in North for grape production. Black Sahebi, Black Prince, and Anab-e-Shahi are some popular types grown here. Punjab has recorded 15.5 (000 m) of grapes production this year too in its scattered area of 0.5 (ooo’ ha). Madhya Pradesh’s climate and soil condition is suitable for grape production. The Titari village is highly known for Ambi grapes vineyard. MP is on 12.5 (000 m) annually in grapes production. The area dedicated to achieve this target was 0.5 (000′ ha).

Haryana’s grapes are commercially and majorly used for making wine, jams, and candies. Thus, the state enjoys the seventh position among-st the top states in India based on grapes production. This year has been a drop in grapes production with 1.9 (000 m) in its dedicated area of 0.1 (000′ ha).

Jammu and Kashmir gained great popularity in Repora grapes production and also in juicy apples and ripe strawberries. Some more varieties include; Ruby, Sahibi, Anabeshai, and Hussaini. J&K has been producing on an average 0.5 (000 mt) of grapes every year in its distributed land of 0.3 (000′ ha). We hope you enjoyed knowing about the 10 Largest grapes producing states of India. Also read other interesting articles related to India in our blog.