Top 10 Expensive States in India to Live In 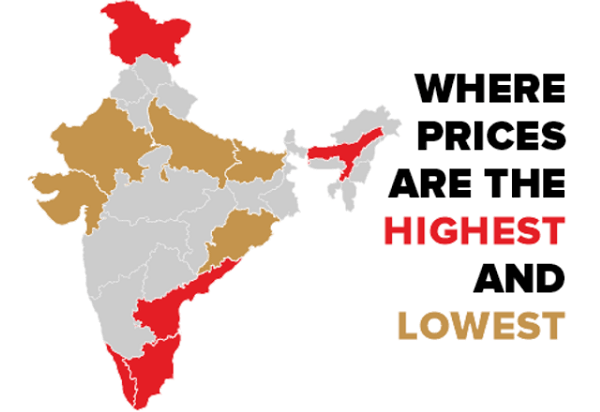 India has been known as an under developed country; however that does not refrain some states from calling themselves poor. The country has some of the best states in terms of its cost of living. The focus on this article is amongst the top 10 expensive states in India.

Although, the discussion is about States rather cities, we would still like to put a highlight for your reference that Mumbai city in the state of Maharashtra continues to be the most lavish and pricey city. Major business happens here.

Top 10 Expensive States in India to Live In

Despite the inflation and recession issues running throughout the country, Jammu and Kashmir has been rated as the most expensive state. The financial reports confirmed that the annual inflation rate was the highest with 8.61% as of 2017-2018. Kerala adds more value to the people’s lifestyle and the state is indeed, an expensive state to live in. The inflation rate for Keral rose to 8.1% as of 2017-2018. We just began to mention about the top states in India based on expense.

Tamil Nadu counts to about 7.56% of inflation rate as of 2017-2018 reports. This brought price hikes in various sectors making the city an expensive place to live in. The cost of living also increased with the same for those who could afford it.

The inflation percentage for Andhra Pradesh counted to 5.79% making it reach in the top states in India based on expense. As per the RBI, these states breached the 4% target from 3.58% that was set for November.

Assam ranks on the fifth position in its list of expensive states of India. The state has accumulated 5.8% inflation.

Rajasthan has connected well with the inflation too as per the RBI reports of 2017-2018. The percentage reported for the last year has been 3.96%. Rajasthan also ranks high in many other fields. Gujarat ranks on the seventh position amongst the 10 Largest expensive states of India. Many places in Gujarat including cities will leave you astonished with its inflated prices. Thus, the state is affordable by few from the settlement perspective.

With the current situation from petrol price hike to travel costs, Karnataka is termed as the most expensive ever in India. It is no doubt that the state is beautiful however; it is difficult to survive with such expensive cost of living.

Kolkata has expanded its horizon in the transportation system and rail system. Although, the meals and drinks are less expensive compared to the other states mentioned above, it is still not cheap either to stay. We cannot deny the fact that there are cities like Mumbai and Pune that have jaw-dropped many people in terms of its expensive cost of living. With the prices continuing to rise up from real estate sector to F&B, we must admit Maharashtra continues to be a major pricey state in relation to some top cities.

Do share your feedback on the 10 Largest expensive states of India and take a look at our other topics in India too.