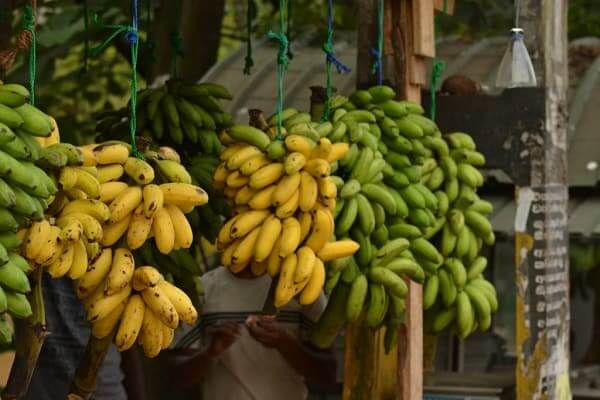 Banana is one of the most demanded fruit in India due to various health benefits. Consumption of banana helps reduce issues like piles, constipation, lack of protein, asthma, and other digestive disorders. Let us help you with the top 10 banana producing states in India.

Take a look at these and bring banana home to get rid of many health issues as mentioned above.

This state in the south earns the maximum attention in banana production. The total produce yearly is about 5136.2 metric tonnes. The fruit is majorly used in most recipes in Tamil Nadu. If you wish to consider the targeted area for banana production, Ravulapalem in Godavari district is the centre point for the fruit. The place is highly rich in its soil for this fruit and this is why they manage to produce about 3242 metric tonnes of banana production. Karnataka is leading too in the list of top states in India based on banana production. One of the banana specialities is Nanjangud which is majorly produced in the areas of Mysore and Chamrajanagar districts. The total produce contribution is 2529.6 metric tonnes.

Bihar enjoys banana and mango production to a great extent. The plains and soil are well-suit for fruit vegetation. The banana produce is about 1702.412 metric tonnes. We are yet to discuss the remaining 4 from the 10 largest banana producing states of India.

Madhya Pradesh contributes to about 1701 metric tonnes of bananas in India. The state is also popularly referred to as honey producers in India. The climate and fertile soil makes it convenient for bananas to grow smoothly.

West Bengal ranks the 8th position in banana production. The state delivers variety of fruits and veggies every year from its soil. Ghonto is one of the popular recipes of West Bengal which is prepared from Banana flower. The production is about 1077.8 metric tonnes.

Banana production contributes to 837 metric tonnes. Other than bananas, the state enjoys great attention in the production of sweet potato, sugarcane, papaya, and jute.

Orissa is known for banana farming too as its total production is 521.31 metric tonnes. Most people in Orissa use Banana leaves as a part of their dish for traditional food servings. Similar practices are followed in other southern areas of India too.

If you enjoyed reading the article on 10 largest banana producing states of India, do take a read at our other interesting articles of the blog too.