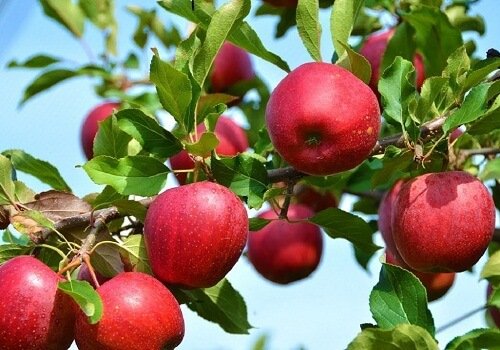 India has enjoyed the limelight in apple production as various states are known to produce the best apples in the world. To share a fact, more than 20 lakh tonnes of apples are produced and marketed every year from India. There are various places known to be the top 10 apple producing states in India.

This article will help you with the names of states with major apple production in India. The names are random and not ranked in the order of produce.

Jammu and Kashmir is known to be the den of apple production. It enjoys the share of 77.71% contribution in apple produce in India. There are other names in the list too but, the apples here have a different attraction. On an average, Jammu produces 1808.33 tonnes of apples per year. Apple garden in Jammu and Kashmir

Himachal Pradesh enjoys contributing 19.19% of its apple production in the country. Some of the key varieties produced in India include; Anna, Maayan, Mollies, Michal, Rich-e-Red, Gala, Firdous, and more… The state enjoyed total production of 446.57 tonnes of apple for 2018. Sharing the contribution of 0.32% of apple production, Arunachal Pradesh also enjoys a good position in the list of top states in India based on apple production. Many reports have given third ranking to AP being a major apple producing state with production of 7.35 tonnes of apples for 2017-2018.

Being in the highlight of eastern Himalayas, Assam apple are popular too. Apples are one of the most commercially grown fruits in Assam and that is what makes it arrive in the list of top states in India based on apple production.

Tamil Nadu has favourable climatic conditions for apple production. You will get to see fresh apples and fresh apple juices also here. The total production for 2017-2018 in this state was 0.01%.

Apple production is the staple occupation for most tribal people of Nagaland. They largely depend on apple production and marketing here for their survival. The overall production on an average is 1.99 tonnes and thus, the share is 0.09%. Read further to know more about the other 10 Largest apple producing States of India.

Enjoy ripped fresh juicy apples of Mizoram. Even if you buy a basket of fresh apples from a local vendor in Mizoram, you can earn great profits by selling it outside for its extreme good quality.

Hope you enjoyed reading about the 10 Largest apple producing States of India. Continue to eat apples due to its various health benefits.