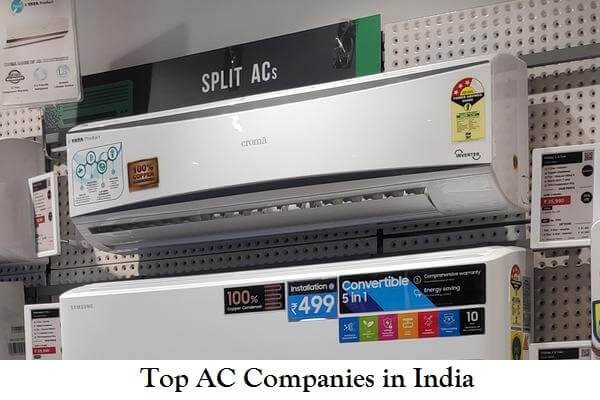 Air Conditioners are a necessity nowadays in India among the middle class and rich class people. Due to high heat in summer, fans are not sufficient to bear the heat and provide cooling. The lifestyle of middle class families in India is changing and they need more luxury commodities to live a peaceful and relaxed life.

In recent years, the number of AC brands in India have been increased to capture more market share. A good number of new players are also coming to India to capture further market share and create a new user base in the country. In this article, we have compiled a list of top 10 AC companies in India based on their popularity, market share, and other information. Voltas is a major AC brand in India and popular among the people of India. It’s a popular brand, founded by the Tata Group, one of the trusted business groups in India. The Voltas ACs are more popular in homes, shopping malls, luxury shops, and other commercial space.

Voltas’ All Weather Smart ACs are more popular day by day in India, thanks to their durability and performance.

Samsung is not an Indian company but they have deep roots in India. Samsung is a South Korean private company, headquartered in Seoul, South Korea. It is one of the most popular AC brands in India, which is included in our list of top 10 AC brands in India. The company offers a wide range of AC models, such as Triangle Inverter AC, Split AC, Window AC, and more. They have a good presence in most of the big cities in India.

In India, people love to buy Japanese products, thanks to their durability and performance. Daikin is a Japanese AC brand, popular in India too. It is one of the best AC companies in India, which offers good models which saves electricity.

They have good market share in India with presence all over the country. Daikin is also a trusted brand name among the people of India for AC models.

LG offers a wide range of AC models in India and they have good durability and performance. People do not hesitate to buy LG ACs in India, thanks to their trusted brand.

Whirlpool is an American AC brand, popular in India. The company entered India in 1987 with the aim to get good market share in most consumer electronic products. Right now, Whirlpool is one of the best AC brands in India.

Whirlpool air conditioners rely on the turbo cooling technology to deliver high performance. The company is headquartered in Michigan, United States of America.

Videocon is the second Indian company which is included in the list of top 10 AC brands in India. Videocon is a popular brand among the people of India, which is involved in many consumer related products. Their ACs are rated amongst the best in the industry.

The company has a presence in each and every corner of India. The company is expanding their business in all towns and cities of India to capture more market share.

Blue Star was founded in 1943 and considered as one of the oldest consumer electronics companies based in India. The company has provided cooling facilities to a large number of corporate, residential and commercial customers.

They are one of the trusted AC brands in India with good market share. It is the third Indian company in popular Air Conditioner brands in India after Voltas and Videocon.

Haier is a popular AC brand in India which is included in our list of top 10 AC companies in India. The company is originally from China, one of the most popular manufacturing hubs in the world.

Haier is also a popular consumer electronics brand in India with a wide range of products such as ACs, fridges, washing machines, and more. Haier ACs are lauded for their superior performance, excellent cooling, and longevity.

However, the cost of O General ACs are little higher compared to other AC brands in India. The company was formed in 2000 by Japan’s Fujitsu General and Dubai’s ETA-ASCON STAR.

Spread the love
Tags:Brands in IndiaTop Companies in India