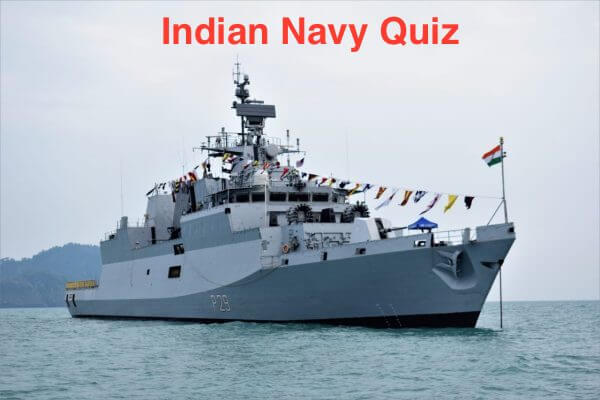 The soldiers of Indian Navy used to sacrifice their life at the time of calamity and war of the peace of the mother land. Here, the list of questions on Indian Navy makes us to know much more about the Indian Navy in detail. The General Knowledge Questions and Answers on Indian Navy will help you for the preparation for your different competitive exams. #1. When was the Indian Navy founded?

#2. What was the former name given to Indian Navy?

#3. Which of these is the current Chief of the Naval Staff?

#4. Which of these is a rank in Indian Navy?

#6. How many operational commands is operated by Indian Navy?

#7. What is the rank of officers heading each operational commands?

#8. Which day is observed every year on 4 December to celebrate achievements and role of the naval force to the country?

#10. Which former Chief of Naval Staff has passed away recently on 16th October 2015?

#11. Which of the following Indian Naval Ships, part of the Indian Navy’s Western Fleet based at Mumbai, entered Dubai on 5th Sep’15?

#12. On 3rd Sep’15, in which of the following forces did Delhi High Court allow permanent commission for women?

Indian Navy
Indian Army
Indian Air Force
All of the above

#13. The biennial joint multi-nation Naval exercise held in the Indian Ocean is named – (The exercise was recently held in February 2014).

#14. Lt Commander Abhilash Tomy of the Indian Navy became the first Indian to complete a solo, unassisted, non-stop circumnavigation of the world in 2013. What was the name of the vessel used by him?

#15. At which of the following places is the headquarters of a Naval Command NOT located?

#16. On which of the following dates is the Navy Day celebrated in India?

#17. In 2013, the Indian Navy inducted the Boeing P-8I Aircraft at Naval Station, Rajali. To serve what purpose the aircraft has been inducted?

#18. Which one among the following is the unit raised to protect the naval assets?

#19. Dhanush, a missile inducted into the Indian Navy

#20. Which of the following is India’s first indigenously developed nuclear powered submarine?

force projection
Naval warfare
sealift
All the Above

#22. Who is the supreme commander of Indian Navy?

Vice-President
Prime Minister
Precident
None of these