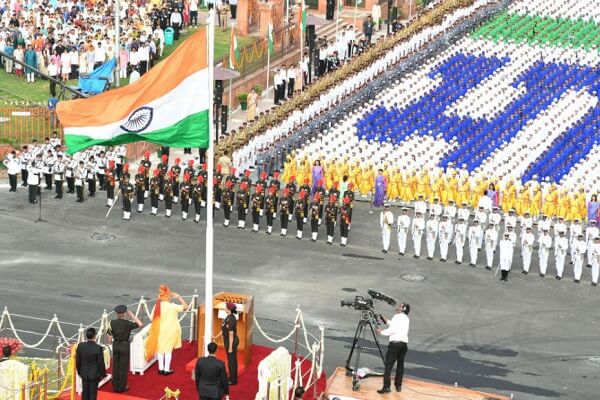 India is an Independent Country. And we all Indian citizens used to celebrate Independence Day with great joy. All the kids are also interested to know much about the independence day and about the great leaders. So, here, we present you a General Knowledge Quiz on Independence Day.

It will also help you to know much about the battle and a great efforts done by the leaders. You can know much about the Independence Day from your grand parents who saw the battle. So, In this article, we provide you Objective Type Questions and Answers so that you can practice it for free. #1. Who was the president of the Constituent Assembly that held the ‘Independence Meeting’?

#2. Who was the viceroy of independent India?

Lord Bentinck
Lord Mountbatten
Lord Wallesley
None of these

Rajkumari Amrit Kaur
Vijaylakshmi Pandit
Sarojini Naidu
None of these

#4. What does the navy blue wheel that appears in the Indian national flag stand for?

#5. In 1997, the year of 50th anniversary of Indian independence, the US Senate passed a resolution, designating it as a National(US) Day of celebration of…

#6. They are the national animal, bird, flower and fruit of India. Pick out the right combination (in the same order).

#7. Since when India had been recognized as a republic?

#8. The first stanza of Tagore’s ‘Janagana Maana’ has been selected as India’s national anthem. How many stanzas are there in the original song?

#9. Who is the author of the National Anthem of India?

#10. Who gave the slogan “Swaraj is my birthright and I shall have it”?

#12. The first Indian National Army was founded by…

#13. Where does the name India come from?

#14. Why was 15 August 1947 chosen as the date of power transfer by Viceroy Mountbatten?

#17. As of now, how many states and union territories does India have?

#18. Who designed the Indian rupee symbol?

#19. Who is the only Indian president to have served two terms?

#21. How long does the Indian National Anthem last officially?

#22. Which was the first weekly paper published by the Indian National Congress in 1889?