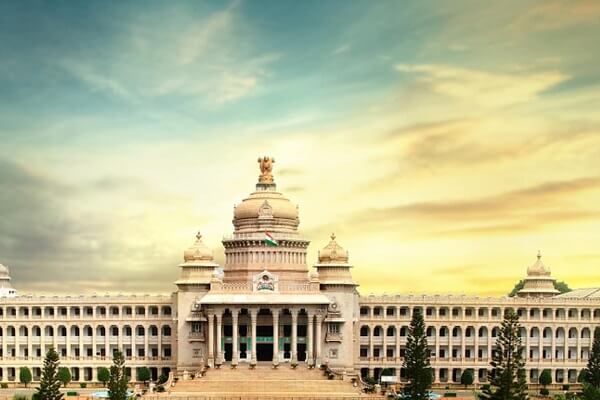 Bangalore is the city of Karnataka. It is considered as the Silicon Valley of India. It is also very well known as the Garden City. Here we present you some quix questions of Bangalore city which will help you to come out of the several exams of the city such as KQA, and many other competetive exams.

This questions and answers will make you to learn more about your city and will increase your general knowledge (GK). Here, questions provided are related to your city’s culture, history, and much more. So here you can start learning about your metrolpolitian city by choosing correct answer of the questions. #1. _____ is the smallest district in Karnataka by population?

#2. In which state of India is Bangalore located?

#3. What was the old name of Bangalore?

Mysore
Madras
Indraprastha
None of these

#5. The Glass House in Bangalore is one of the places worth seeing. Where is it located?

#6. Bangalore has its own palace – the Bangalore Palace. Which royal dynasty owned this palace?

#7. Bangalore is known as the IT city because of its large number of software companies like Infosys and Wipro. In fact, Bangalore even featured in a US presidential election and the word ‘Bangalored’ is included in some dictionaries. What does this word refer to?

#10. Who is said to be the founder of the city of Bangalore?

#11. Which of the following premier scientific institutes is present in Bangalore?

#12. Bangalore has a number of lakes, but much of its water supply comes from one of the most important rivers of India. Which river is this?

#13. Previously the HAL Airport was the only airport in Bangalore. However, a newer and bigger International airport was opened in 2008. Where is the location of this airport?

#14. Which of the following National Parks is located in Bangalore district?

#15. What is the original name of Bangalore in Kannada language?

Bangaru
Begur
Bengaluru
None of the above

#17. What is the name of first Kannada newspaper to be circulated in Bangalore and when it was first circulated?

#18. When was Indian Institute of Science (IISc), the premier institute for scientific research and study in India, established in Bangalore?

#19. Which of the following cricketer hails from Bangalore?

#20. In 1985, which company was the first multinational corporation to set up base in Bangalore?

#21. Bangalore became the ___ city in India to have electricity, powered by the hydroelectric plant situated in Shivanasamudra in 1906.

#22. Which of the following cities is known as IT Capital of India?

#23. Bangalore is located on which Plateau in the south-eastern part of Karnataka?