An Essay on Lohri Festival for Kids, Children and Students 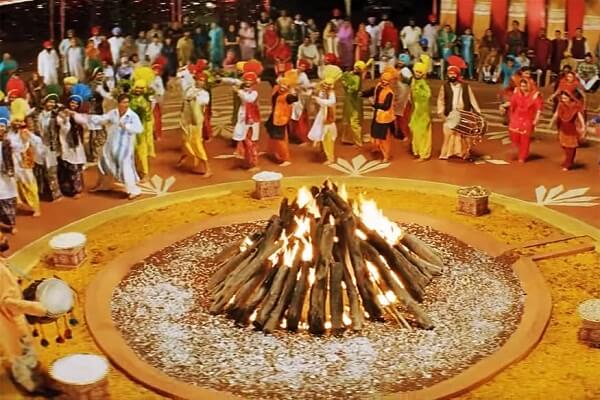 Punjab, the food bowl of India is one of the most fertile states. Being fed by the five rivers- Ravi, Jhelum, Chenab, Sutlej and Beas, Punjab is known as “India’s bread basket”. No wonder that most celebrated festivals of this region are related to harvest, like Lohri and Baisakhi. Lohri is celebrated to mark the end of winter solstice and coincides with another popular festival “Makar Sankranti”. It is believed that Lohri represents the longest night before winter solstice. Most festivals are a tribute to Mother Nature and its constituent elements and Lohri is no exception. It is celebrated to mark the end of winter and start of spring. Celebrations include lighting a bonfire to ward of the cold wintery nights and welcoming the longer days, as winter solstice passes. This festival is associated with the harvest of rabi crops, which include nuts as well as sugarcane. Thus, these two and their products (gud and gajak) feature prominently as sweet offerings during Lohri celebrations. Another crop grown and harvested during this time frame is mustard. Therefore, having sarson ka saag on Lohri is also an ancient custom.

People sing and dance around the bonfire apart from offering lohri to the bonfire. This is their way to thank the Sun and Fire Gods for a bountiful harvest.

The significance of this festival is different for everyone. Farmers of the Punjab region regard Lohri as their financial new year. During the 19 th century, winter crops revenue was collected on Lohri. Even now, rents are collected and new agricultural contracts begin on this day.

The Punjabi version of trick or treat can be observed during Lohri. A fortnight prior to the festival, groups of young boys and girls go around the neighbourhood to collect logs for the bonfire. Other items such as jaggery and grains are also collected, which may be eaten or sold and the sale proceedings divided among them.

The legend of Dulla Bhatti is associated with Lohri and songs in his praise find a mention in the celebrations. Groups of girls are often seen and heard around the town singing songs about Sundri-Mundri and Dulla Bhatti.

The Lohri Prasad consists of til gajak, gur (jaggery), moongphali (peanuts) and popcorn, which is distributed after the bonfire. Some of these items are even offered in the bonfire, as a way to commemorate the end of one year and the starting of another.

Note: An Essay on Lohri Festival could be translated in Punjabi, Hindi, English, Sanskrit, Marathi, and other regional languages of India. Please note that, we are not allowing anyone to copy this essay for their personal website or blog.